A new crossing over the Seine 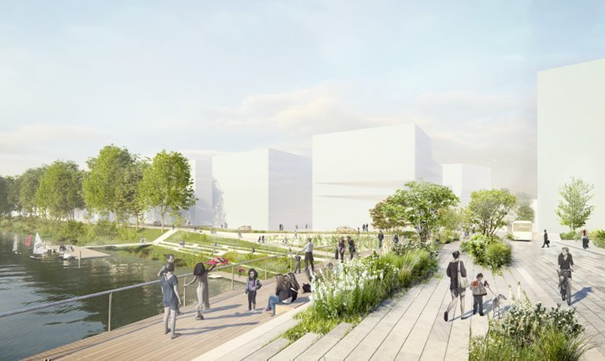 A new crossing over the Seine has been created between L’Île-Saint-Denis and Saint-Denis. Initially, it will facilitate the movement of athletes inside the Athletes’ Village during the 2024 Olympic and Paralympic Games. Then, this bridge will be open to “soft” transport methods: buses, bikes and pedestrians. It will therefore be possible to get to Pôle Pleyel from the banks of L’Île-Saint-Denis in 13 minutes by foot!

The operation, which will also restore the banks at L’Île-Saint-Denis, is part of a larger development project on the banks of the Seine. On the Île-Saint-Denis side, the River Eco-district will be a mixture of housing, offices, shops, a hotel, businesses and facilities. On the Saint-Denis side, the Universeine neighbourhood, located near the Cité du Cinéma will also offer housing, offices, businesses and a nursery.

The structure, made of steel and concrete, 130 metres long and 16 metres wide, was designed by the Artélia, Lavigne & Chéron and Philippon-Kalt consortium as an esplanade where “soft” and collective transport methods will be used. The public will be able to enjoy the spaces developed with planted areas.

This crossing will be a real time saver for users, especially to access the future Grand Paris – Saint-Denis Pleyel station. On foot, it will take 13 minutes compared with 30 minutes today, and by bike it will only take 4 minutes. A considerable advantage, in order to access this station, which will also serve the Grand Paris Express metro line 13 as well as the new lines 14, 15, 16 and 17.

The works will start between now and 2021 and the whole development will be delivered in 2023.